Weddings at the 2010 Celtic Manor Resort 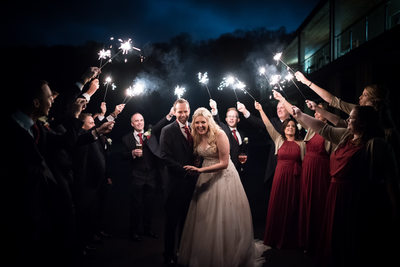 Winter weddings in South Wales! I've done a lot of these recently in and around the Cardiff area, but for this wedding we found ourselves at the 2010 Club House which is part of the Celtic Manor Resort. Aptly named after the 2010 Ryder Cup golf tournament which was held at this purpose built championship golf course. As a golf fan myself, its a pretty big deal to have Europe and USA's finest players taking part in this major tournament in our own back yard.

Thats enough of the golf talk though, I'm not a golfer, I'm a wedding photographer in South Wales, lets get back to this wedding photo. In December, as I'm sure you know, it get dark from around 4pm. This was taken at 8pm, so it wasn't just dark, it was a really deep dark winter's evening. No pictures outside here then? I hear you say. Well, actually when it gets dark I can access a whole different repertoire of images using the advanced skills which I believe set me apart from other photographers.

The couple pictured here, who by the way were wonderful and total pleasure to work with all day, said before the big day that weather permitting they would like a sparkler exit. Oddly enough, this was the first one that I'd ever done, so being the diligent fellow that I am, I researched the best way to pull this off. And, I think I did ok.

All of the light in this image came from the sparklers. No flash, no ambient light, just pure unadulterated naked flames. I had to guess my exposure value beforehand, and I don't know if this was luck or judgement, but it was spot on!

Sparkler shots like this are actually a challenge to set up. Firstly you need 20 people who aren't too drunk (a challenge in itself when the wedding is in full flow), and then all of the sparklers need to be lit at the same time. We certainly pulled it off though, however my joke about not lighting the bride on fire got mixed results from the other guests.